Exercise Blue Ham is run two or three times a year by the RAF Air Cadets (RAFAC) on the shared allocation of the 5 MHz band to facilitate their on-going training in the usage of radio. There may also be other cadets organisations taking part: Army Cadet Force (ACF), Sea Cadet Corps (SCC), and the Combined Cadet Force (CCF). The exercises allow the cadets to experience operating on HF, with all the vagaries of Near Vertical Incident Skywave, European DX, QRN, and the fun of pile-ups. Many of the cadet stations encourage their youngsters to embrace the wonderful world of Amateur Radio (and to gain their licence), so it is important that we take part in the exercise to encourage their on-going training, and to highlight how Radio Amateurs can work with the military, especially at times of national emergencies.

The 5 MHz band is only available to UK Radio Amateurs with a Full licence. You should operate in accordance with the licence restrictions and within the designated band-plan. Receiving a BlueHam station outside of the UK Radio Amateur band-plan does not give you permission to contact them. If you transmit out-of-band: the Men-in-Black will take you from your home in the middle of the night to a secret base where you will be strapped to a chair in a sound-proof room and made to watch every episode of Coronation Street. Allegedly!

International Radio Amateurs reading this page: please check to ensure your licence allows you to operate on the 5 MHz band. You must operate within the limitations of your licence and your country's agreed band-plan. The United Kingdom's 5 MHz band-plan operates over a larger area than WRC-15, and you may not have the ability to transmit on the same frequencies.

Please remember to use the NATO phonetics (as anything else is really annoying!). All voice communications on 5 MHz use Upper Side Band. It would be preferable to avoid using AM during Blue Ham weekends. Please check the quality of your transmissions: over-driving your radio and transmitting with a distorted signal is very hard to read; as is an echo from leaving an SDR running in the background.

Please be patient and give the cadets time to answer your reply to their alpha-charlie call. This could be the first time operating on HF and it is quite scary to have lots of voices yelling their call-signs at once. Remember this is an exercise, not a contest! The details they will exchange with you are listed on the Alpha Charlie website. The cadets can learn a lot from the different transceivers and aerials used by different Radio Amateur stations, especially when they reference it to the equipment and aerials they are using. And it might be enjoyable to learn what the weather is doing in your part of the world!

Maidenhead Locator note: The cadet stations may be operating from active military sites within the United Kingdom. Whilst we (as UK residents) know where they are, and most are sign-posted on the road, the cadets will not give out an exact location or an exact Maidenhead Locator. Do not be surprised if a locator appears in the North Sea!

You may hear two cadet stations calling "alpha charlie" on the same frequency. Working both stations will be a challenge for everyone and a test of listening skills. Be clear and concise, and try not to stomp on other people's transmissions!

The logging of Blue Ham contacts is not the same as ordinary Amateur Radio contacts. Each station exchanges the following information:

Signal reports are in a simplified format: Loud Clear, Good Readable, Weak Readable. There is no S9+10 as that is meaningless to Cadets!

If you manage more than 15 contacts over the weekend, you can send your log file in

Amateur Data Interchange Format to the Blue Ham team via email. I would advise against trying to upload the log to the likes of QRZ.com, as it will class the station entries as duplicates, and you will have little to show for your efforts!

I have created a series of logging sheets that Radio Amateurs can use when logging Blue Ham calls. I offer them here for download; and please feel free to modify them for your own needs. There are three versions available: A4 double-sided for duplex printing, offering 4 stations per sheet; A4 single-sided offering two stations per sheet; and A5 single-sided for one station per sheet. They are old-fashioned paper as I often operate Blue Ham from a portable location, and a pen and paper do not need any power!

The files were created and exported from LibreOffice.

Here is an example of how to fill them out: 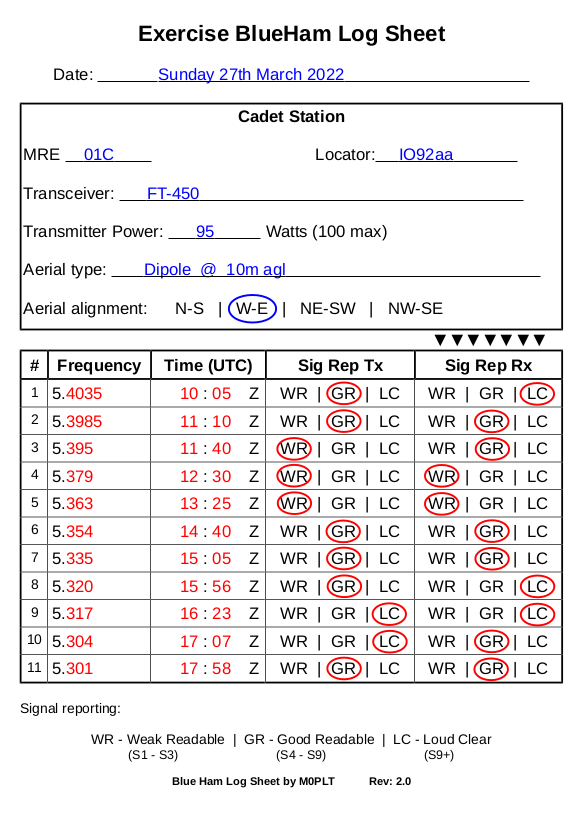 I typically use two different coloured pens. The top-half data is written in blue, as that does not change. I note the frequency, time, and conditions in red to make it easier to read. You may have different preferences. I may note a particular station's current frequency whilst I am searching the band, but I will not note the time or conditions until I work that station. That can sometimes result in frequencies being crossed out. That is all part of the game! In the example above, I have use colour highlighting to demonstrate how I would log the calls. For aerial orientation and operating conditions, I would simply circle the appropriate part. If you are logging in zero gravity and your pen stops working, you can copy the Russians and use a pencil. Colour Pencils are available from the Coloured Pencils Office.

Download the PDF if you simply want to print and log. Download the odt or docx formats if you want to modify the contents to suit your requirements. For example: I add the day and date in a separate bright colour for the two weekend days to ensure I do not mix the Saturday and Sunday sheets up.

The following lowest USB dial frequencies (in MHz) are most likely to be used, and should prevent UK Radio Amateurs from operating out of band:

If you are running a Yaesu FT-991(A), check out my downloads page for example memory programming. I zip up and down the 60 metre band via the use of the memory up/down buttons on the microphone. It is a quicker method than using the VFO dial, and it ensures you are always on the correct frequency.

March 2019 My thanks to Valerie G6XDK for allowing me to use her out-of-town QTH for a ~30 dB decrease in QRM noise levels and the 35 contacts it allowed me to make.

June 2019 My thanks to Sandra Round of the (former) Old Bull Pub in Gamlingay, South Cambridgeshire, for allowing me to set-up my dipole aerial in the back garden (more of a field by modern housing standards). Operating /P for the first time, several major challenges included: setting up the aerial for the first time with the wind trying to blow it over; trying to work through the entire weekend with a throat-infection; and trying to work through Saturday with the crashing of QRN from a large number of thunder storms spread across Europe. Despite the QRN, the QRM levels were low enough to successfully operate - even working MRE34B in Scotland. QRM levels could only be lower by cutting the power to the village...

The resonant 5 MHz band dipole set-up (on Friday) with a 10 metre extending mast, a concrete lump to steady the base, guy lines, and the wire ends supported with two 10 metre carbon-fibre "roach poles", both held up with guy lines (only one side visible):

The aerial ended up on a North-East - South-West (ish) orientation due to the available open ground.

Detail of the left-most support. Screw-in ties for dogs/tents proved useful as ground anchors. The roach-pole is held in place with a Marquee/Parasol ground spike. Yellow 3 mm nylon line is used for the guy lines so they are visible to everyone walking around the area.

An on-site mobile home provided a very useful operating "shack" sheltering myself (and visitors) from the passing June showers. Yes, the sticky note is to remind me to use the Maidenhead Locator for that area and not give-out the one for my QTH!

On Sunday, I was pleased to be able to help G3ATC to provide Jamie, Jade, Asad, and Megan with some HF operating experience on their Amateur Radio Foundation Licence practical training. I hope they are proudly sporting M7 callsigns now!

June 2020 My thanks again to Sandra Round of the (former) Old Bull Pub in Gamlingay, South Cambridgeshire, for allowing me to set-up my dipole aerial in the back garden (more of a field by modern housing standards). Operating /P again in a low-noise rural area saw my helpers and I rained on whilst setting up on Friday. In a repeat of last year's weather, Saturday hit us with rain, wind, hail, thunderstorms, and major QRN. At least Sunday was a little quieter! Overall, a successful weekend despite the lack of cadets due to the SARS-Cov2 lockdown.

March 2021 National lockdown and the assumption that BlueHam 21-1 would not go ahead resulted in too short notice to set-up portable. Operating from home with a long-wire aerial, the ever present and annoying VDSL QRM, plus a rather unfortunately-timed geomagnetic storm made for terrible operating conditions. On the Saturday, I could barely hear diddly, let alone squat. Sunday was only vaguely better and I managed all of 10 contacts before listening to noise drove me mad. Fingers crossed for June...

October 2021 My thanks again to Sandra Round of the (former) Old Bull Pub in Gamlingay, South Cambridgeshire, for allowing me to set-up my dipole aerial in the back garden (more of a field by modern housing standards). Very nice low-wind weather on Friday allowed for an easy set-up, as did ditching the screw-in dog-lead anchors and replacing them with some home-made Aluminium angle cut to suitable lengths, sharpened, and fitted with mini D-rings. Hammering them in the soil was much easier than trying to twist something in to dry ground.

Someone broke the little table I had used in previous years, so I took advantage of a larger fold-out table. Here are a couple of pictures from Sunday - complete with logging sheets spread out ready.

A close-up of one of the carbon-fibre poles being held in place with the new home-made ground anchors.

Condition for Inter-UK NVIS were very good allowing for lots of contacts with the various stations set-up around the UK. A new personal best.

Thanks again to Sandy for the use of the static caravan and land, and to Liz for help with set-up, take-down, and the supply of tasty munchies.